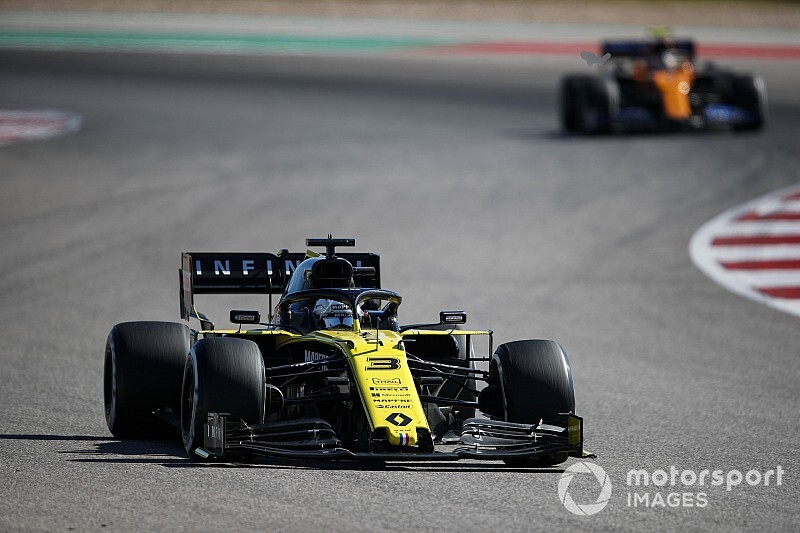 Renault "not ashamed" of fighting McLaren

Renault F1 team boss Cyril Abiteboul says he is not ashamed that his team is fighting McLaren this year, as he admits his outfit has no answer to its rival in qualifying trim.

On the back of a rollercoaster campaign, Renault looks unlikely to be able to close down the 38-point gap to McLaren for fourth place in the constructors' championship.

But while it means the French car manufacturer will fall short of its pre-season target of consolidating fourth place itself, Abiteboul says the season is proof that nothing comes easy in F1.

"It is a fact that McLaren has done a better car, a better chassis than we have," Abiteboul told Motorsport.com. "I am not ashamed of fighting against McLaren. They are still a fantastic team and a great name in F1.

"I think we just need to accept things take time, whether we like it or not. F1 is tough and indeed the fact is that we are getting a better and better understanding of the car and we are capable of improving the set-up, because there is no development of the car, it hasn't moved for a while."

Abiteboul says one of the key things Renault needs to get on top of is why its car is so much better in race trim than it is in qualifying – where McLaren has established itself as the fourth quickest outfit.

"They [McLaren] are way faster than us on Saturday in qualifying, at least half a second, but on Sundays for some reason we are much closer and better than them actually," he said.

"It was the case in the USA, in Mexico and it was also the case in Suzuka, even though it was not so visible because of the starting position and strategy, and also what happened after the race.

"So we know where to focus. But having said, we know that qualifying is where the actual pace and limitation of the car are shown.

"Our car has fundamentally some characteristics that are not pleasant when you are pushing it to the maximum. But in the race, when you are starting to manage, then things are much nicer."

Daniel Ricciardo backed up Abiteboul's view that one of the factors that could be holding back Renault on Saturdays is that its car operates in a very narrow performance window.

"If I watch the onboards, I do feel like if I look at McLaren they seem to be able to get the lap time out of the car a bit easier," said the Australian. "Let's say that window we talk of seems slightly wider for them, and I think that's why in qualy we're not really always able to extract maybe the most out of it.

"In short, it's probably easier for us to make a mistake, or to get the set-up spot on, but then in the race once everything kind of, the pace comes off and you're not on the limit of the tyre really the whole race.

"I think our window expands naturally for the pace, and I think that's why we're able to maybe come back a little bit towards them."