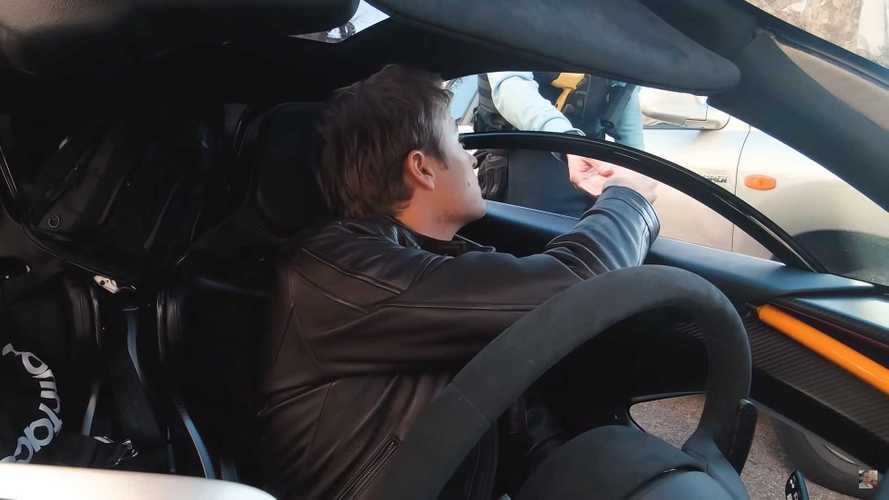 Throwback Thursday: Nico Rosberg Gets Stopped By Police in Senna

The 2016 F1 champ isn't fazed by high-speed corners, but the French rozzers get him all shook up.

When you put a former F1 champion behind the wheel of a McLaren Senna, good things are bound to happen. There’s also the possibility, however, that some bad things might happen. We never saw retired F1 champ and all-around awesome dude Nico Rosberg panic during his racing days, but – and we have to be honest here – it’s a bit amusing seeing him get very nervous when the French police show up to have a word with him. More on that in a bit.

The crux of the video is obviously Rosberg taking the Senna out for some hot laps. The trip begins in Monaco – never a bad place to start a road trip in a hypercar – with the ultimate destination being Le Castellet and the Circuit Paul Ricard not far from Marseille. The F1 portion of the course was closed, but Rosberg was slated to turn laps on the instructor portion of the track. Apparently, a drag race between the Senna and a superbike was also planned, but a missing set of bike keys killed that idea.

It’s one thing to have a seasoned journalist sampling the Senna’s exceptional aerodynamic wizardry, but with the car having been named after a legendary F1 driver, gauging the car’s ability through the senses of an F1 champion seems appropriate. Rosberg narrowly eclipsed Mercedes teammate Lewis Hamilton in 2016 to claim the F1 world championship, following in the footsteps of his father Keke who also captured the F1 title back in 1982. Ironically, his dad also raced against a young Ayrton Senna, so there’s a bit of comfortable symmetry in all this.

In any case, the younger Rosberg seemed legitimately impressed with the Senna, both on the track and off. Before arriving at the track he even likened the Senna’s grip and aerodynamic prowess to an F1 car, and the on-track footage certainly shows him not holding anything back.

The only time we see him sweat, however, is when French police stop him en route to the course. In another ironic twist, he wasn’t stopped for speeding, but for basically getting lost on a crowded street and making a wrong turn. And boy does he sweat, especially when it comes to finding the registration papers and his passenger’s filming of the altercation.

It all worked out in the end with a friendly visit and no fines, but still, it’s a bit comforting knowing an F1 superhero like Rosberg is just as human as the rest of us. Sometimes, anyway.