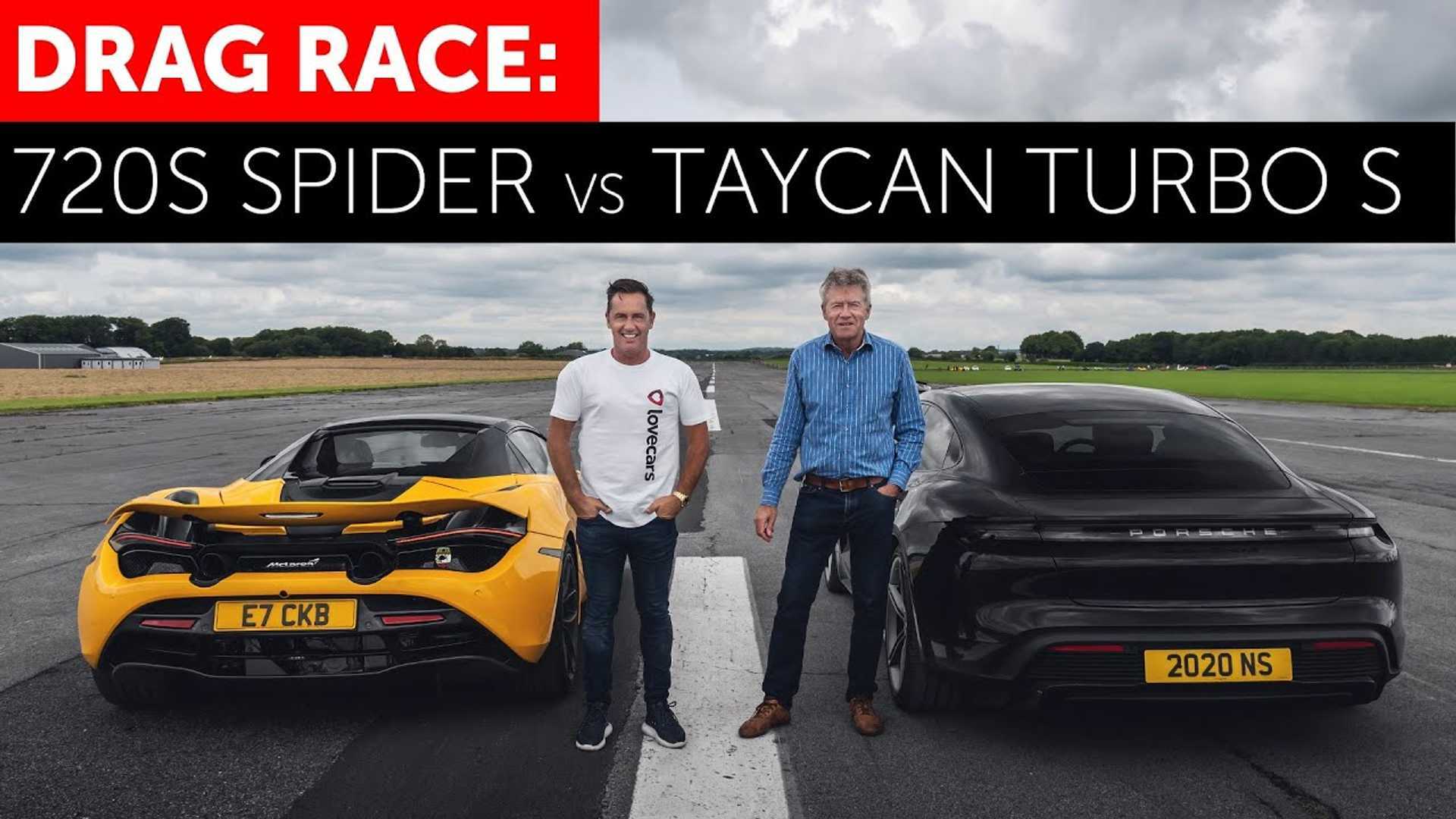 The Spider certainly has more bite to it than this.

It’s a known fact the McLaren 720S is an absolute animal at the drag strip as very few standard production cars dare to duel Woking’s supercar. The Spider featured in this video is a tad slower than the coupe due to its extra weight, but it undoubtedly remains a force to be reckoned with regardless of its competitor.

Even though it’s a completely different car, the Porsche Taycan is also a top performer in a drag race, especially if we’re talking about the flagship Turbo S. It may weigh a lot more than the McLaren, but it makes up for that with a whopping 774 pound-feet (1,050 Newton-meters) of instant torque. The 720S Spider has to make do with “only” 568 lb-ft (770 Nm) that kick in at 5,500 rpm.

Not only does the Porsche pack more torque, but also more horsepower (750 hp vs 710 hp). However, it has to carry around an extra 1,874 lbs (850 kg). Despite these major differences between the two, they’re pretty similar when it comes to accelerating off the line. On paper, the Taycan Turbo S hits 62 mph (100 km/h) from a standstill in 2.8 seconds while the McLaren is only a tenth of a second slower.

The tables are turned if we’re talking about the 0-124 mph (0-200 km/h) run since the 720S Spider is significantly quicker, completing the task in a mere 7.8 seconds while the Taycan Turbo S needs an extra two seconds. Numbers aside, the two performance machines have all the right ingredients for an exciting drag race.

The folks over at Lovecars pitted the McLaren against the Porsche, but it’s not the neck-and-neck fight we were expecting. The 720S Spider’s reaction off the line was disappointingly slow, likely due to the launch control not being activated, allowing the Taycan Turbo S to take the lead by a wide margin. We can see the British supercar recuperating some of the lost ground later in the drag race, but it was too little too late.

The droptop 720S did the sprint to 62 mph (100 km/h) in 3.81 seconds or nearly a full second slower than the official number, while the Taycan Turbo S was a tenth of a second quicker than advertised – at 2.7 seconds. The ICE-powered car completed the quarter-mile in 11.1 seconds, but we’ve seen stock 720S coupes registering a quarter-mile time a full second quicker than that. The Porsche did it in 10.76 seconds at 128.5 mph or 1 mph more than the McLaren.

We Love Drag Races As Much As You Do:

It’s that kind of drag race that begs for a rematch to show the true capabilities of the 720S Spider and prove the internal combustion engine is not willing to go out without a fight just yet.